skip to main | skip to sidebar

I have planned a Men's Night Out for December 14, 2012, starting at 6 pm, at The Alpha & Omega Coffee House in Puyallup. They are a Christian business and worthy of supporting. Here's their website for directions and their menu so you can plan on how much you want to spend, lots of good food to choose from. I have been told the food is great!

They have live music too!

You do not need to be there right at 6 pm, just get there when you can. I will be there by 6 pm to get the table. We will stay as long as you all want and you can leave when you want. Bring friends or come by yourself.

If you plan to attend, please let me know so I can get a table for all of us. I look forward to fellowship with you all!
Posted by Brad Nickel, Der Fliegenfischer at 6:58 PM No comments:

Trip Destination — Deschutes River (WA), Yelm, WA. Date October 6, 2012. I have obtained special access to this gem and October is a great time to go fish it. We will meet at the Roy "Y" at 9 am to carpool if we can.

Bring food and fluids for the day. Dinner will be at the river as a group afterwards. You'll need waders/boots, stimulator and nymph type flies, and of course your rod rigged to go.
C&R ONLY!!!!! Barbless Hooks! See the current reg.s for all the info.
Posted by Brad Nickel, Der Fliegenfischer at 11:47 AM No comments:

I have rescheduled the trip to July 28, 2012. Again, I would like to know who would be going, so please tell me if you are planning on going. So far many of us will be going to date. I really like Leech Lake! Can't wait.


Leech Lake requires a Recreation Pass (Forest Service) to park; the Discover and the Fish & Wildlife access pass are NOT valid up there for "parking" permits - although you must have the Fish & Wildlife pass on your mirror. I recommend paying the day use fee, unless you are going many times this year, instead of trying to find a place to and buying the Rec. Pass.


I rescheduled due to communications that the lake was inaccessible, however, thanks to Don and his friend giving Don a report on Dog Lake nearby to Leech, the area is quite clear of any snow and quite accessible. Apparently I have been had by the District Ranger up there. Jerks. They just don't want to open the area when the people want it opened apparently. I understand the cutting of funds and lack of people to open the Leech Lake campground, but don't tell me it isn't accessible - when it IS!


Trip Destination — July 28, 2012. Leech Lake, White Pass Summit, WA. We will meet at Graham Safeway parking lot at 6 am to carpool if we can. Bring food and fluids for the day,
we can go to dinner in Packwood afterwards if you'd like.
You will need a boat, i.e. float tube, pontoon boat, raft, rowboat — NO MOTORS are allowed on the lake. Fly Fishing Only. See the current reg.s for all the info.

Erin has put out an invitation to those who'd like to join him Memorial Day weekend to fish the Puget Sound for SRC's. Here's the info:


will probably do some cutthroat fishing on friday and or saturday or sunday over memorial day weekend at some local beaches for anyone who would like to join.  most beaches can handel about 2  or   3  people

We had a great day on Munn Lake March 3. The weather cooperated for the most part - NO RAIN! Yeah! It was overcast, sunny, windy, somewhat chilly, but that is fishing, and it didn't rain....I guess I said that already. 8^) We all were layered up and faired the weather quite well indeed.
There were six of us who sailed the lake. Paul, Brain, Jerry, Brad, and two of Paul's friends......whose names escape me......must be an age thing. Paul's friends met us at the lake, the rest of us carpooled down, trailering the pontoons. I believe we were all on the lake by 9:30 amish. It's an interesting lake indeed. Small and manageable, with a pretty wide range of depth to it. Here's a link to the lake info:
http://www.washingtonlakes.com/LakeInfo.aspx?id=125&t=1
I think we threw everything we had at them, but in the end only two fish were netted, officially "caught", and released by Brad and Paul. One was caught in the shallows by the bulge on the east side of the lake, basically mid way down the lake from the launch. It was caught on a Black Sally chironomid pattern, using an indicator set at about six feet. A beauty of a 15 inch Rainbow, quite dark in color though, but in line with the lake characteristics as it was a dark water lake.
The other Rainbow was along the same size and was caught trolling a wooly bugger down the middle of the lake, but more toward the south end. It escapes me what color the wooly bugger was, but we only used black, olive, and white, so choose from those.
One thing that lake has is a massive chironomid hatch. WOW! Around 10:30 am the little buggers started emerging and hatching off. They were everywhere and an awesome sight; learning and watching what they do close up and in person as they surface, then break out of their shuck, launching into the air to fly off and land on you or the boat. Let's just say God is AWESOME and His creation is amazing! The hatch literally lasted for about two hours, but interestingly enough, no fish were feeding on the surface. And they weren't feeding subsurface either, at least what we had to offer them as a substitute.
Around 1:30 pm a local fellow launched, anchored up about 30 yards due south of the launch, and proceeded to knock 'em dead, schooling all of us. He was very nice and generous enough to have each of us come on over to his watercraft, take one of the flies he was using, and tell us the depth to fish it, etc. A great man; a true sportsman willing to educate and share. He also told us that the lake really doesn't wake up until around 1:30 pm, so getting there early, well, is just not worth it. Good to know for future trips - we can all sleep in!! In respect of his graciousness, I will not reveal the fly pattern, but allow him to share it as he chooses if you happen to be there when he is. You will know if you are.
Afterwards we all went to Hawks Prairie for dinner and then home. A great day, with great friends and Brothers in Christ!
Posted by Brad Nickel, Der Fliegenfischer at 3:25 PM 1 comment:

I didn't post this, just set it up on the regular website, so I thought I would do so here also to allow for another avenue to get to the info.

Of course the March Munn Lake trip is gone by, but the rest of the year to date is here:

June 23, 2012. Leech Lake, White Pass Summit, WA. We will meet at Graham Safeway parking lot at 6 am to carpool if we can. Bring food and fluids for the day, we can go to dinner in Packwood afterwards if you'd like. See the current reg.s for all the info.

October Date TBD. Deschutes River (WA), Yelm, WA. I have obtained special access to this gem in an area not accessible to many and October is a great time to go fish it. We will meet at OSLC at 8 am to carpool if we can. Bring food and fluids for the day. We can go to dinner in Yelm as a group afterwards if everyone would like to. You'll need waders/boots, stimulator and nymph type flies, and of course your rod rigged to go. C&R ONLY!!!!! Barbless Hooks! See the current reg.s for all the info.

If you have any outings you'd like to offer up to others to join, send me an email and I can spread the word for you. Send me the date, meeting location, time, species to fish for, etc.

Posted by Brad Nickel, Der Fliegenfischer at 11:52 AM No comments: 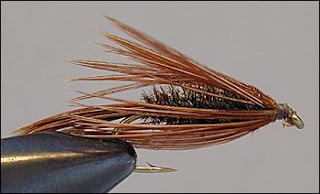 (Photo courtesy of West Fly)
Here is the materials list for the Carey Special, yet another one of the Munn Lake recommended flies.

I think the picture shows enough to be able to tie it without instructions.

This is one of the old staples of flies, one you can use anywhere, and should be in your fly box. So simple.
Posted by Brad Nickel, Der Fliegenfischer at 9:33 AM No comments: 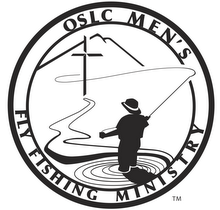